Jill: This weekend I had the privilege of spending time with some fabulous ladies in Ft. Branch, Indiana. I LOVE being able to bring encouragement and hope through women’s conferences and events. Mark: Because we were in the neighborhood, we decided to head over to Washington, Indiana where I used to spend my summers with many aunts, uncles, and cousins. Jill and I so enjoyed staying with my great-aunt Betty. She amazed me when I was a kid and she still inspires me in so many ways.

Jill: We also had the privilege of spending time with Aunt Marcella and Uncle Ray who will be celebrating their 71st wedding anniversary this coming Friday!  Can you believe that???? 71 years of marriage!

Mark: Jill asked them what the key was to 71 years of marriage and they shared a story with us to answer that question. Here’s the story in their own words:

Uncle Ray: I ended up having to work a double shift one day. Back then we didn’t have cell phones so I couldn’t let Betty know.

Aunt Marcella: When he walked in the door I said very harshly, “WHERE HAVE YOU BEEN?” He didn’t say a word and just walked back out the door.

Uncle Ray: I decided I was going to walk around the block and come back in again.

Aunt Marcella: He was gone a few minutes and then he walked back in the door. I said in a much softer, kinder voice, “So where have you been? I’ve been worried sick. And why did you walk back out the door?”

Jill: Mark and I talked about that story as we drove home yesterday. There’s so much to glean from it. 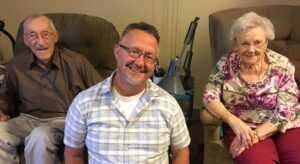 Happy Anniversary Aunt Marcella and Uncle Ray! You’re an inspiration to all of us!

What about you? Which of the five takeaways from Ray and Marcella’s story do you need to practice?