Best of Jill’s Blog: Tattoos, and Earrings, and Piercings…oh my!

I stood in line to get Ryan’s new book that he’d written to encourage teenagers in their faith. When I was almost to the front of the line I took a double-take. This pierced and tattooed young man did not look like anything I would have expected Dr. Dobson’s son to look like. He was dressed in leather motorcycle clothing with tattoos up his arms and big holes in his ears. But there was no mistaking it…this guy loved Jesus.

That experience was eye-opening to me. I had to come to grips with my own stereotypes. I also had to begin thinking about this stuff as a parent.

I believe it was Anne’s junior or senior year when she called home on a high school choir trip to New York. “Hey mom, I’ve got a question for you,” she began. “Would it be ok if I got my nose pierced?” I think I about choked on the ice tea I was drinking. I told her that no it wouldn’t be ok for her to get her nose pierced. According to her, everyone was doing it as a momento of the trip. Our answer was no.

It was shortly after that when Evan began to ask to get his ear pierced. He was a freshman in high school I believe. We told him no, but his request was sincere. We finally realized we needed a plan for answering these questions. There were several other siblings to follow!

About that time tattoos were becoming more popular. We had to determine a plan for that question and decided that the kids have to be 18 and pay for it with their own money. Evan got his first tattoo his freshman year of college and his second about a year ago when he was 20. Both of his tattoos express his faith in some way.

The day Erica turned 18 she scheduled her tattoo appointment—designed by her artistic self, of course! Hers is based on 1 Corinthians 13 and simply states “Love never fails.” 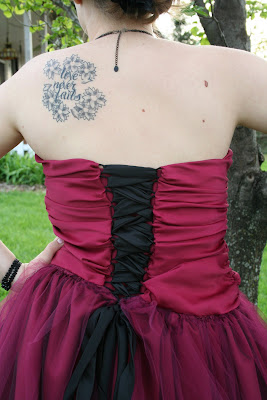 So what am I trying to communicate here?

Simply this: you better have a plan.

Tattoos, piercings, cell phones, curfews, earrings….discuss it with your spouse and come to some agreement so that you have an answer when they ask.

Because they will ask.