Grandma is safe in the arms of Jesus 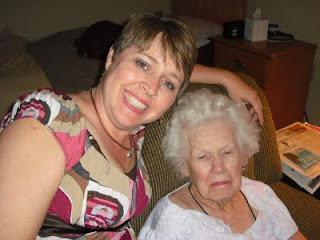 Last Wednesday I received a call that my 92-year-old Grandma (picture at left taken in July 09; second picture is with Evan at Erica and Kendall’s wedding) was not doing well.  Thursday she seemed to be a little better, but by Friday they determined to bring in Hospice.  Hospice felt that she probably had about 3 or 4 days left. Friday evening I received a call from my sister just as Austin’s basketball game was finishing up (they won….finally!).  She said they felt it was now hours instead of days.  We drove home from the ball game, I threw some clothes in a bag, and headed alone to Indianapolis.
By 11pm Grandma’s two daughters and three of her four grandchildren were at her bedside.  By 1am, most everyone was so tired so they headed home to sleep and my sister Juli and I took the night shift.  Around 3am Grandma’s breathing changed and within minutes she took her last breath with Juli and I by her side. 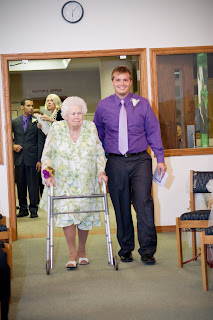 There’s something very holy about being with someone when they move from earth to eternity in heaven.  I’ve had that opportunity on three occasions in my life—when some friends of ours lost their 2-year-old to a brain tumor, when Mark’s grandma was taken off life support, and Friday night when my sweet Grandma went from our arms to Jesus’ arms.  Those memories have made a permanent impression on my heart and mind.
I have no regrets with Grandma’s death.  She often visited our family and our children knew her well.  We’ve made many trips to Indy to spend time with her.  In fact, we saw her on January 6 and I said to my kids, “this may be the last time you see Grandma…let’s make it special.”  They responded with, “Mom, you’ve said that every time we’ve seen her since summer.”  I told them that they may be weary of me saying it, but one of these days they’ll see the truth of it.  Indeed January 6 was that last time they would spend time with Grandma.
Do you have an elderly parent, aunt, uncle, or grandparent that you need to sit down and write to or make a phone call to?  Someone that you need to just make the trip and visit?  Don’t wait any longer.  We are certainly not promised tomorrow.
We’ll be in Indianapolis Monday and Tuesday of this week for the calling and the funeral.  My family is doing well with this…they know Grandma lived a full and beautiful life.