Home as a Research Lab 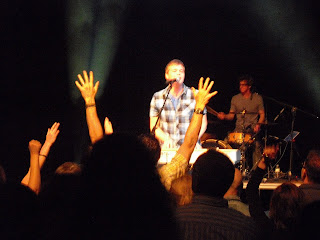 A couple of weeks ago I sat in a concert watching my 23-year-old son’s band make beautiful music.  I leaned over to the mom sitting next to me (whose son was playing guitar in the band) and said, “Wow, this makes all those music lessons worth it, doesn’t it?”  She agreed.

In my book, My Heart’s at Home, I outline 12 roles that home plays in our life.  One of those roles is Home as a Research Lab.  I’ve been thinking a lot about that particular role lately.

Evan did T-ball when he was 5.  Soccer when he was 7.  And basketball at 8. He could take or leave them all.

But when he started piano lessons in 2nd grade and excelled, we knew we were on to something.  In 4th grade he started viola at school because he loved the harmonies violas added to the orchestra.  In high school he taught himself to play guitar.

Home as a research lab was working well.

In high school I encouraged him to try out for the school musical.  He did, but hated it.  That’s ok…when home is a research lab we find out our likes and dislikes, our strengths and weaknesses, our talents and our, well….not so talents.

As a music teacher myself, I grew frustrated when Evan couldn’t sight-read music like I thought he should be able to. He played by ear so easily and never read music easily.  He even learned the classical pieces he played more by ear than with music. Once I stopped trying to make him into someone he wasn’t and I instead celebrated his unique musical gifts, it freed him up to be who he naturally is.  He began writing his own music and became a worship leader in our church when he was a teenager.

Now he and his wife Julie are headed to Chicago.  They sold their home and are moving in with us for 6 weeks until they make their move at the end of May.  Evan’s band, Emerson, was offered a recording contract with a record label in Chicago.  It’s a risky move for Evan and Julie.  It’s hard to make it in the music world.

But home did it’s job and now Evan gets to do his.  That’s home as a research lab at it’s very best.