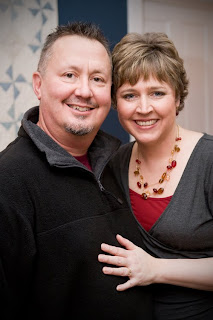 When Mark and I speak together on marriage, we introduce ourselves as being married “27 years…17 of them happily.”  It’s a description we wish weren’t true, but unfortunately it is.  Our marriage has had plenty of ups and downs. We’ve dealt with rage and out-of-control anger.  We’ve dealt with criticism.  We’ve dealt with pornography.  We’ve dealt with not knowing how to resolve conflict in a healthy way.  And that’s all just the tip of the iceberg.

I was recently asked how it is that we have stayed together when it just might have been easier to throw in the towel.  It’s a good question that we want to share about in this edition of Marriage Monday.

When I look back over the years, I think there have been four things that have made a difference for me.

1) Giving up is not an option. I have believed from day one that we took our vows “for better or for worse.”  I’ve seen what I would describe as “for worse” and I promised to stay true even in the midst of “for worse.”

3) A change in prayers from “God, change him/her,” to “God, please change me,” can make a huge difference.  I think this is what maturity is all about.  For many years, I prayed “God, change him….and quick!” But not much happened to improve our relationship.  It wasn’t until I began praying, “God, change me,” that our relationship improved.  That’s when I saw my critical spirit and the damage it was doing.  That’s when I discovered my anger and how my tone and words were wounding my husband.  When I could see my own sin and begin to deal with it appropriately, it was a positive change for our relationship.

4) Marriage is hard work and counseling can be a good thing.  Marriage is much harder than anyone realizes.  It takes time, patience, intentional communication, and alot of give and take to make a marriage go the distance.  After the first seven difficult years, we honestly realized that we didn’t know HOW TO BE MARRIED!  We decided to pursue marriage counseling to better understand each other and learn how to communicate and handle conflict in a healthy way.  It took us years to pay off those counseling bills…but it was worth every penny of investment.  (One important note:  Counseling doesn’t work so well if you don’t have number 3 in place first.)

I, too, can identify some themes that have made a difference for me.

1) God says it’s doable. God created marriage. It’s doable.  Honestly, I had to admit that I didn’t know what I was doing!  I had to “go to school” on marriage.  I did that through counseling, reading, listening to CD’s, and going to marriage seminars with Jill.  Some of those were things I honestly didn’t WANT to do, but I knew I HAD to do for our marriage to make it.

2) Focus on yourself and how you need to change, grow up, or mature.  When I look at my contributions to the messes in my marriage, I have to admit that sometimes I needed to grow up.  My anger was a form of control and it was time for me to grow up and learn how to lead and influence rather than control.  I was introduced to pornography in grade school and it’s hold on my mind and heart was big.  But I had to be willing to admit that it was causing a huge gap of intimacy between Jill and I.  I had to pursue change because it was hurting me and it was hurting our marriage.

3) Ask for help from others further along in the journey than you.  During a more recent difficult season of marriage, I found great help from a man in our church who has been married over 40 years.  Bill was willing to challenge me, share with me, and encourage me along the way.  Don’t be afraid to ask for help from someone a little further along on the journey than you.  And asking for help isn’t weak at all…it’s actually a point of strength for a person.

4) Commit to learn about marriage, what normal marital challenges are, personality differences, etc.  Much of what I’ve contributed to our difficulties have been my unrealistic expectations of what marriage should look like.  The more I’ve learned about marriage and the blending of two lives into one relationship, the more I’ve come to understand that our challenges have not been unique.  In fact, they are quite normal.  Unfortunately, people are just so good at putting on masks and pretending all is well that we’re often comparing the difficulties inside our marriage to how other couples appear to be doing so well on the outside.  That’s not a fair comparison at all.

In fact, that’s one reason why I’m glad we’re doing Marriage Mondays.  We hope to share the “inside” of our marriage with you so that you will not feel alone in the challenges you experience in your marriage.