Five Red Flags Your Marriage May Be Destructive Our #MarriageMonday posts are written to help couples dig deeper, connect intentionally, and to become more tuned into the everyday challenges and realities of marriage. But what if you’re dealing with something more? What if you’re in a toxic relationship?

We’ve invited Leslie Vernick, a licensed clinical social worker for over 35 years, to address that topic today.  Leslie is a relationship coach, speaker, and author of 7 books, including How To Act Right When Your Spouse Acts Wrong, and  The Emotionally Destructive Marriage: How to Find Your Voice and Reclaim Your Hope.

You can find her online at www.leslievernick.com

When Emma first met Rick, she was instantly smitten by his handsome features, strong masculine build, his take charge personality and over the top charm.  Ten months later they were married in a fairy tale wedding in front of over 200 friends and family.

Once they returned home from their honeymoon, Rick made it clear to Emma that he was the head of their home. He immediately took over the family finances, told Emma that he didn’t like her best friend, Cheryl, and he didn’t want her hanging with her anymore. He said she was a bad influence.  Despite that fact that Emma worked full time as a Project Engineer, Rick found fault with everything she did.  It was never good enough or up to his standards.

Sometimes Rick would leave for hours at a time and not tell her where he was. When she questioned where he went, he told her it was none of her business.  Many nights she endured Rick’s tongue lashings, telling her how incompetent, stupid, or disappointing she was.  Emma tried hard to please Rick, hoping that he’d see how hard she tried to please him but somehow she always fell short.  The more she tried, the more he found wrong.

Now, five years and two children later, Emma feels broken and scared. What was so wrong with her that Rick couldn’t love her? Why couldn’t she make her husband happy?  He often called her the most foul and degrading names.  Emma felt like she was dying inside.  Who could she talk to? What should she do?  Did anyone see or care about what was happening to her?

Emma’s cries echo the despair of many women and even some men who find themselves in a marriage that is destructive and damaging to their emotional, spiritual, mental, financial and physical well-being.   Emotional abuse is something people don’t openly talk about or even recognize yet it is real and it’s pervasive.

Here are five red flags that your marriage may be emotionally destructive.

Does your spouse bully you, threaten you, humiliate you, intimidate you, force or coerce you to do things you don’t want to do?

Does your spouse mislead you?   Deny things that you knows are true, lie about things or try to make you feel crazy?

Do you feel invisible? Minimized? Ignored?

Does your spouse act as if your sole purpose is to meet his/her needs and make him/her happy?

If you recognize your marriage has one or more of these red flags, here’s what you need to do to make necessary changes:

Tell the truth, especially to yourself. You can’t see clearly what your next steps will be until you takes this first one. Most people are terrified to admit, even to themselves, that their marriage is destructive. Instead they pretend, minimize, rationalize, and make excuses.  Like Emma did, many blame themselves for their spouse’s mistreatment and say, “I shouldn’t have said (or done) that. It’s my fault I made him mad.”  But healthy people live in reality, not fantasy.  The worst lies a person can tell are the ones they tell themselves. You won’t get or accept the help you need unless you can first tell yourself the truth: your marriage is emotionally destructive.

Most of us feel a lot of shame about being abused.  It’s hard to admit the ugly truth to yourself let alone share it with someone else.  Isolation is a tactic used by concentration camp guards to maintain control over prisoners. Does your spouse try to isolate you from your family and friends?  The more you submit or comply to keep peace, the more power and control he or she will gain over you.  Educate yourself about abusive tactics and look for a support group where you can share your story with other safe people who understand.

Learn to speak up and set boundaries.

When you have lost your freedom to say “No” you’ve been captured, muzzled, or restricted like a child.  This is not healthy for you as an adult or a spouse.   You are a marriage partner but that does not mean that you silently prop your spouse up in order to enable his or her destructive behavior to continue.  Rather, you can learn to lovingly yet firmly speak up and set boundaries so that he or she might come to their senses, see their destructive behaviors, and hopefully be willing to stop them.

One of life’s great teachers is painful consequences.  Sadly, many Christian’s have been encouraged to mitigate negative consequences because “love covers a multitude of sins.”  While that’s true, love does not cover all sins and sometimes someone’s wrong-doing is so grievous and chronic the only way to shock someone awake is to implement strong negative consequences.  For example, you might refuse to drive with your spouse if he regularly indulges in road rage or you may initiate a therapeutic separation because she refuses to change her abusive behaviors.

What’s happening behind closed doors is not only destructive to you; it’s harmful to your children as well as to your spouse.  No one feels good about himself or herself when they mistreat the people they promised to love and protect. For your family’s future, change needs to happen and that change begins as you grow strong enough to wisely stand up for yourself and your family.

To learn more about destructive marriages, check out www.leslievernick.com or pick up Leslie’s book The Emotionally Destructive Marriage: How to Find Your Voice and Reclaim Your Hope. 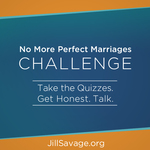